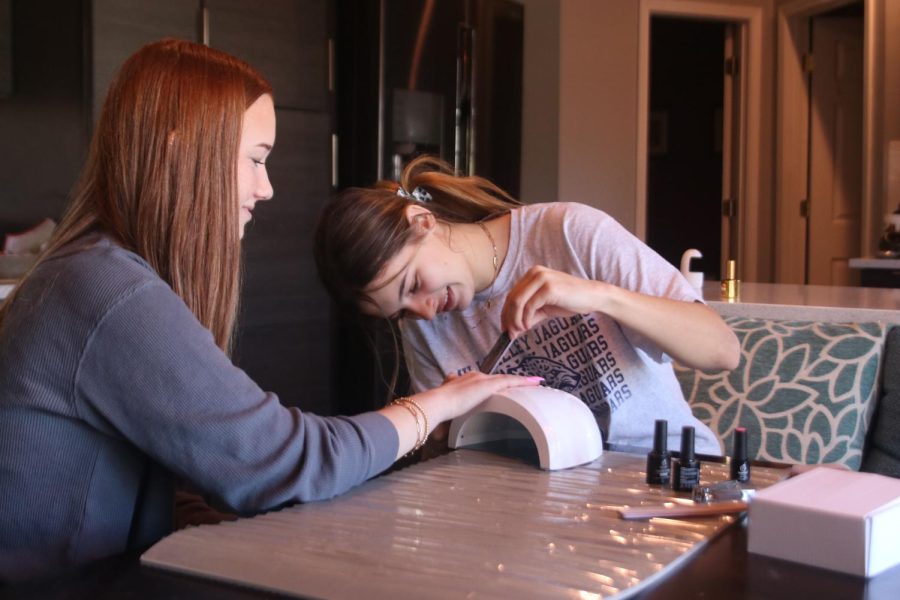 Wren Altis is a freshman who applies acrylic nails at her home with supplies purchased on Amazon. She also practices for hours. In addition to doing her own nails, she also does her friend freshman AnnMarie Geise’s nails.

Altis became inspired by several posts from social media and started to make her acrylic nails herself in June 2021.

“I had seen Tik Toks and YouTube videos of people that would do their own nails and I thought it was interesting,” Altis said. “Then, I bought my own stuff to start doing [nails].”

Altis lists the materials she needs to create a nail set.

“I use Gelx nail extensions and you cure the nails with a certain gel. I also use Just Gel nail polish, UV lights, electric nail files and all that type of stuff,” Altis said. “I buy all my products from Amazon.”

Altis was taught how to do nails by Geise when she started to learn for herself.

“Wren has been doing my nails since September,” Geise said, “I prefer Wren doing my nails because we are friends so it is easy to tell her what I want. If there is something wrong, I can tell her.”

Altis practiced more and Geise observed a significant improvement in her nails. Geise recommended that Altis do her nails at home instead of visiting a salon.

“I am extremely happy with how they turn out every time. Wren does as good of a job as a professional would,” Geise said. “It is way more relaxing for me because I don’t have to go into a salon with people I don’t know.”

Not only is it efficient for Altis to do her nails, it is cheaper for her when it comes to  purchasing supplies.